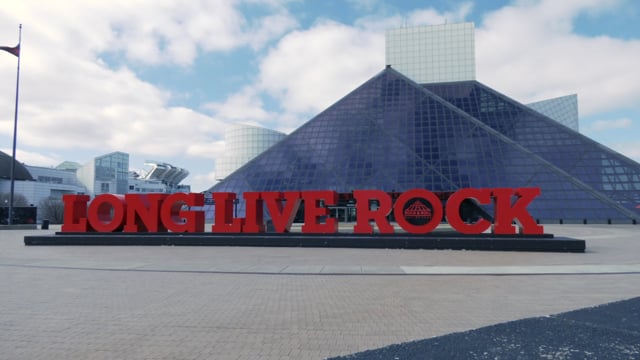 Long Live Rock! That’s the message spelled out in enormous block letters outside the Rock and Roll Hall of Fame located in the heart of downtown Cleveland.  The 55,000 square foot cantilevered structure, designed by I.M. Pei, stands with one foot firmly planted in Lake Erie, part Egyptian pyramid, part grain elevator.  Inside the modern-day temple, music aficionados can explore seven levels of exhibits chronicling the history of rock and roll music in its many forms.

The museum’s main gallery houses exhibits on the roots of rock n’ roll including gospel, blues, rhythm and blues, folk, country, and bluegrass as well as exhibits highlighting the cities that have had a major impact on rock and roll music: Memphis, Detroit, London, Liverpool, San Francisco, Los Angeles, New York and Seattle. From Eric Clapton’s signature guitar to the Beatle’s Sgt. Pepper’s outfits, the Hall has something to make every music fan gasp in disbelief.

Every year, the Hall of Fame welcomes over a half-million visitors to Cleveland and reaches millions more through its massive digital social media presence, a reach that grows wider every year.  And thanks to a new production facility, powered by NewTek products and NDI, the Rock & Roll Hall of Fame stands ready to take the legacy of rock music boldly into the future.

“Here at the Rock and Roll Hall of Fame, we put on a wide range of programs and events that run the gamut from concerts to interviews and informational programs,” according to Manager of AV Services, Patrick Lavelle. “In addition, we host a large number of private events that range in size from 20 to 2,500. We’re documenting the history of rock music here, so both the private and the public events need to be recorded, live streamed or both.”

That’s not so easy to do when the concert, interview or informational session can take place in one of several locations on the giant Hall of Fame campus.  But now, with the recent completion of the state-of-the-art SiriusXM studio and video control facility on the museum’s main exhibit floor, any kind of video production, anywhere on the museum grounds, is easily accomplished.

Sam Avellone is Director of Sales at NPI Audio Visual Solutions, based in Cleveland, and he and his staff helped design and install the new video production studio and control room facility.

“SiriusXM partnered with the Rock and Roll Hall of Fame to create this new facility,” Avellone explains, pointing to the glass-walled production studio where museum visitors can watch live interviews of rock and roll legends or musical performances. “The new studio and control room incorporates the ambitious goals the Hall of Fame has set to meet their future video needs.”

The “Truly Amazing” TriCaster TC1: At the Heart of A Sophisticated Control Facility

Just behind the main studio space, hidden from the curious eyes of museum guests, is the newly constructed control facility that makes the Rock and Roll Hall of Fame’s expanded video content possible.  The facility is powered by the TriCaster TC1 & NC1 I/O, New Tek’s revolutionary video production system.

“The TC1 makes it all happen, “ Avellone says.  “It’s the perfect tool. It’s called the TriCaster because it switches, records and web streams simultaneously. TriCaster is the only product on the market that does all three things at the same time in one chassis.

“It’s got a built-in switcher. It’s got built-in DDR’s so the production crew can record video clips into it without the need for an external recorder. And because there are two DDR’s in the TriCaster, you can switch and transition back and forth between DDR’s.  It’s got a 3TB hard drive, which allows storage of a lot of AV footage internally. It has two streaming encoders, enabling the video staff at the Rock Hall to stream independent content to each webstream.  It’s got a built-in audio mixer.  It also has built-in virtual sets, so it’s easy to set up a green screen and superimpose any sort of background behind people. The TriCaster is truly an amazing piece of equipment.”

The AV staff at the Hall of Fame agrees. “The TriCaster meets all our needs,” Patrick Lavelle says. “Most importantly, it all just works. I never hear anybody on the crew say they have to come up with some kind of workaround to get the job done. It’s reliable. The TriCaster works for us every day, every time.”

With NDI There Are No Limits

One of the most important requirements for the newly constructed production control facility was the capability to produce, record, and disseminate content from any location inside the museum and anywhere on the museum grounds.  Many of the larger events at the Rock and Roll Hall of Fame are staged at the Foster Theater, a state-of-the-art 3D facility that takes up most of the museum’s 4th floor.  But there are several other locations that are also used to stage concerts or events.  For example, there is a large outdoor area used for concerts, large enough that it served as a 2019 stop for the Vans Warped Tour.  Capturing all these events, regardless of location, with a minimum of expense, staffing and time became a possibility thanks to revolutionary NDI technology.

“The whole building is tied together in a platform called NDI,” Avellone says. “NDI is basically video-over-IP, which NewTek developed a couple of years ago.  Now, it’s a protocol in the industry.  I use the phrase, ‘if you’re not using NDI, you’re a dinosaur,’ because video-over-IP is what makes this whole set-up happen.  With NDI, we can go anywhere in the complex with a camera and plug into a network jack and send the signal from that camera to the new control room where it can be simulcast or web streamed.”

Once the signal reaches the TriCaster, the finished program can then be archived and sent out live to a variety of platforms. “With another product from NewTek, the MediaDS, the Hall of Fame can web stream any of their content to four separate sites simultaneously, Facebook, Twitter, Livestream, and wherever else they want to stream it.  With the MediaDS, the crew can independently control each site, so, for example, if the Facebook stream happens to lock up, the operator can start and stop the feed without affecting the other three live feeds.”

According to Sam Avellone, NDI technology has revolutionized the production world, saving time, money and personnel.  “In the olden days, you’d have to run a high-definition video cable to any camera covering one of these events,” Avellone says.  “And the problem with that is that the longest cable you could run was 300 feet.  That put constraints on what you could do and couldn’t do.  With NDI, there are no constraints. Anything on the network is fair game, whether you’re ten feet away or all the way across the country.  As long as you’re on the same network, you can broadcast with almost zero latency.

“So, at the Rock & Roll Hall of Fame we can go anywhere in the building and not have to run cables. With NDI, we now spend more time getting the equipment to the location on whatever floor the event is going to be on, than we do running cables, plugging in and going. The set-up process takes minutes instead of hours. It’s basically plugging in one cable.”

Rock and Roll Will Never Die: A Look Into the Future

Although the coronavirus may be putting a crimp in the Rock and Roll Hall of Fame’s style for the time being, it won’t be long before the place is, once again, packed with awe-struck music fans. “We want to do even more with the TriCaster and our new production facility,” Patrick Lavelle says. “We keep expanding all the time, but I feel like we’re only scratching the surface of what’s possible.”

And according to NPI Audio Visual Solution’s Director of Sales, Sam Avellone, the NewTek-powered production facility stands ready to expand in order to continue to meet the Hall of Fame’s needs.

“The TC1 product is the real deal,” Avellone says. “It’s 4K capable out of the box.  Even though the Hall isn’t doing 4K video right now, when they want to make the jump, the TC1 is ready to go.  In addition to the two streaming encoders built into the TriCaster, it also has two Skype channels built in.  So, when the Hall wants to Skype in someone, say, from the New York office, they can do that with ease.”

With their new SiriusXM studio and control room facility up and operating flawlessly, the Rock and Roll Hall of Fame’s mission to tell the story of the world’s most popular, most subversive, and most transformative musical genre can reach even greater heights.  And powered by the constant innovation of NewTek and their parent company, Vizrt, the history of Rock and Roll will never die.

“NewTek has come a long way since their start back in the 80’s with the Video Toaster,” Sam Avellone says. “The company was purchased by Vizrt last year.  Vizrt is a global video production company that has been wildly innovative for years as well.  I think the combination of Vizrt and NewTek is going to mean lots of great things coming in the future.”